Over the past week in Amsterdam, the heads of several Hong Kong firms and institutions have been meeting with European business leaders. Progress on several important deals was going well until the head of Rothwell-Gornt stormed off after his 'unique' negotiation style failed to win over property developers from Amsterdam's city centre. I did not see him again until the following morning, when the newspaper was served with my breakfast. 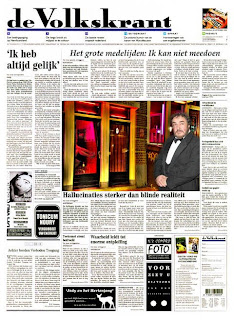 Poor Gornt looked a little the worse for wear, and slightly spaced out, when he was photographed leaving a premises in the Red Light District at 3 a.m., and was heard to be rambling about 'Hallucinations' and 'Stark reality' as the headline states.

Gornt's PR department went into overdrive, thinking attack the best form of defence, trying again to smear the name of the Noble House. As their allegations are entirely fictional, they have settled out of court. I wish Quillian a quick recovery, and am sure he can regain the vast amount of face that he lost with a generous donation to the Amsterdam Orphans fund.
Posted by Tai-Pan at 05:39 No comments: